A search for cosmic-ray sources combining IceCube, the Pierre Auger Observatory, and the Telescope Array Ultrahigh-energy cosmic rays are the particles with the highest energy known in Nature. They have been detected at the Earth but their sources have not been identified nor has the mechanism by which they acquired such energy been understood. Since ultrahigh-energy cosmic rays are charged particles, they are deflected on their path from their sources to Earth and hence their arrival directions do not point back to their sources. However, it turns out that the deviation of some cosmic rays, namely protons, is expected to be only a few degrees at the highest energies. On the other hand, neutrinos have no charge so their arrival directions can be traced back to the place from where they originated. This opens the possibility for investigating common origins of high-energy neutrinos and cosmic rays, which could help elucidate the unsolved mystery of the origin of the highest energy cosmic rays.

In a new study, jointly done for the first time by the IceCube, Pierre Auger, and Telescope Array Collaborations, scientists have looked for correlations between the highest energy neutrino events in IceCube and the highest energy cosmic rays in these two cosmic-ray observatories. The IceCube Neutrino Observatory is located in the South Pole and can detect neutrinos by observing the radiation from secondary particles that are generated when a neutrino interacts with a nucleus in the ice or the underlying bedrock. The Pierre Auger Observatory and the Telescope Array are located in Argentina and the United States, respectively. Both observatories combine a large number of detectors in the ground with air-fluorescence telescopes to detect ultrahigh-energy cosmic rays by observing, in a complementary way, extensive air showers composed of particles that are produced when cosmic rays interact with the nuclei in the Earth's atmosphere. The results of this new study, submitted to the Journal of Cosmology and Astroparticle Physics, are potentially interesting and will continue to be monitored in future joint analyses. 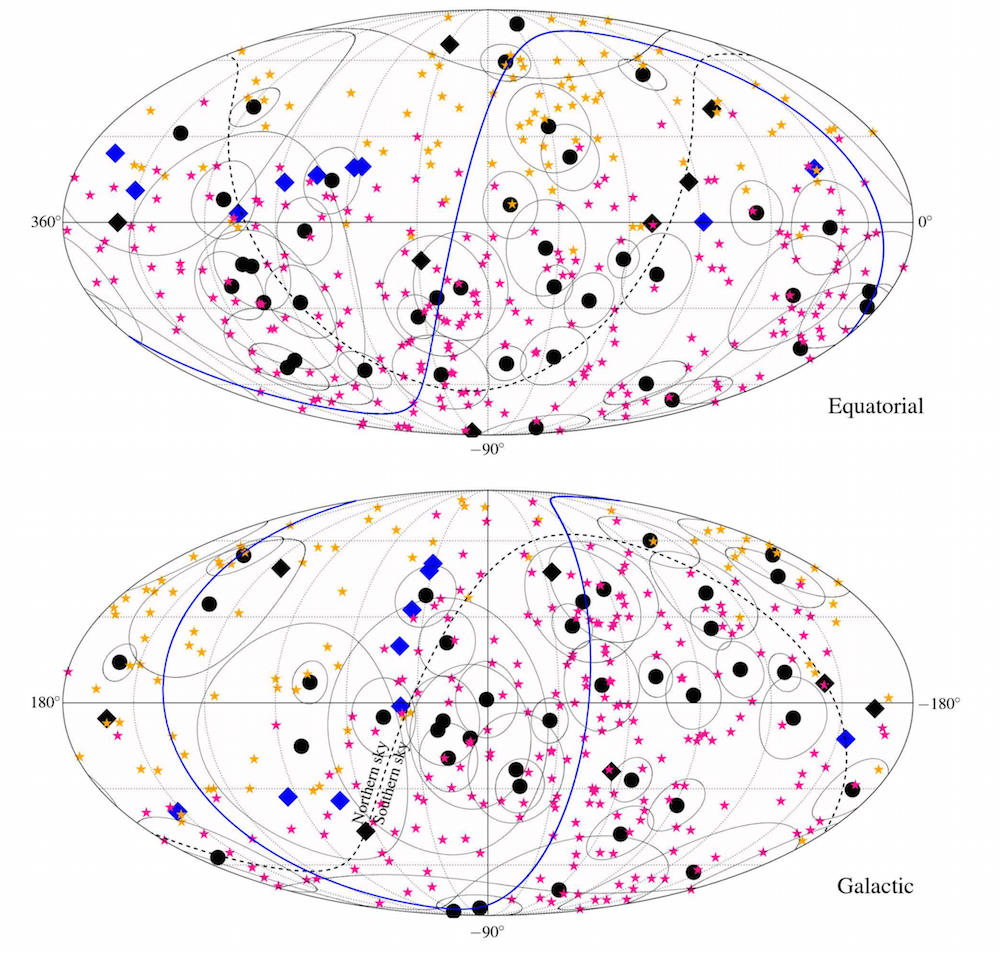 Map in Galactic coordinates showing the arrival directions of the IceCube cascades (black dots) and tracks (diamonds), as well as those of the UHECRs detected by the Pierre Auger Observatory (magenta stars) and Telescope Array (orange stars). The circles around the showers indicate angular errors. The black diamonds are the HESE tracks while the blue diamonds stand for the tracks from the through-going muon sample. The blue curve indicates the Super-Galactic plane. Image: IceCube, Pierre Auger and Telescope Array Collaborations.

IceCube is a one-cubic-kilometer international high-energy neutrino observatory built in the South Pole glacier. The detector is based on a three-dimensional array of 5160 optical sensors deployed deep into the polar ice to collect Cherenkov radiation emitted by charged particles traveling through and near the detector.