Eemian to Early-Weichselian Millenial-scale Climate Variability: insights from a speleothem record from the Han-sur-Lesse cave, Belgium

It is known that the Last Interglacial period, occuring between ~130 and 118 kyr BP, was 2-4°C warmer and that sea level was several meter higher than present. Therefore, this time interval has gained a siginificant amount of scientific attention, given its possibility to act as an analogue for future climate projections in a context of Global Warming. However, the timing, nature and affinities of the natural climate variations during that time period are still highly debated. Currently, a dataset combining at least three speleothems from two different cave systems in southern Belgium (Han-sur-Lesse and Remouchamps) is being constructed to improve the understanding of the termination of the Eemian and the millennial to decadal variability of the Early Glacial times in north western Europe. Preliminary results indicate a rather complex glacial-interglacial transition in Belgium, which is in line with other archives from different locations in Europe. Eventually, integrating these findings into a more regional dataset can lead to an improved knowledge of continent-scaled tendencies, such as previously suggested N-S gradients in the onset of Interglacial and Glacial conditions. 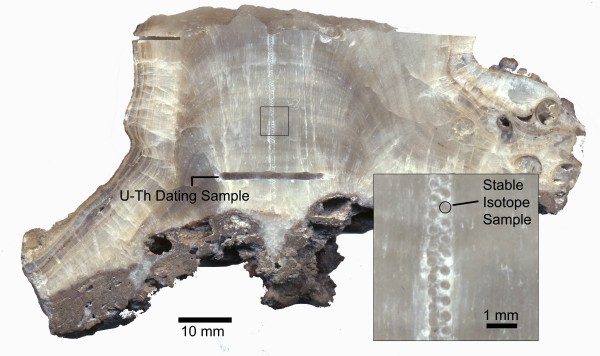