Sam Junius obtained on December 16, 2022 the academic degree of DOCTOR OF SCIENCES with the following doctoral thesis: 'Searching for feebly interacting Dark Matter at Colliders and Beam Dump Experiments'

Pablo Correa Camiroaga obtained on September 9, 2022 the academic degree of DOCTOR OF SCIENCES with the following doctoral thesis: 'Merging High-Energy Neutrino Astronomy with the Extreme Infrared Sky: A Search for Cosmic Neutrinos from Ultra-Luminous Infrared Galaxies with the IceCube Observatory'

Emil Bols obtained on July 7, 2022 the academic degree of DOCTOR OF SCIENCES with the following doctoral thesis: 'Machine Learning for Top Quark Physics'

Paul Coppin obtained on April 22, 2022 the academic degree of DOCTOR OF SCIENCES with the following doctoral thesis: 'Investigation of the precursor phase of gamma-ray bursts through gamma-ray and high-energy neutrino observations' 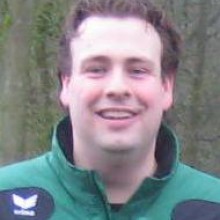 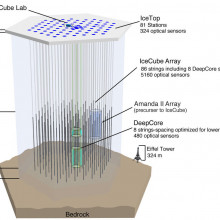 Invitation for Press Conference on ground-breaking results from IceCube experiment 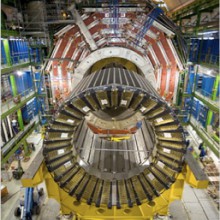 TOP FOOTPRINTS IN THE HIGGS FIELD

The model that describes fundamental particles and interaction forces in physics, known as the Standard Model, provides a comprehensive description of natural phenomena. Nevertheless, it leaves several questions unanswered and it remains incomplete: it excludes gravity and is not able to provide a description of how the world is functioning at extremely high temperatures. All the things we see around us are made of electrons, protons and neutrons. Protons and neutrons, in turn, are made of even smaller elementary particles called up and down quarks. The family of elementary particles however contains much more than quarks, it includes many other types of particles that can only be seen through a number of peculiar interaction processes. The study of elementary particles and their interactions thus represents a great tool in the construction of an ultimate model that would provide us with a complete description of nature.

Read the rest of this article on wtschp.be

The Large Hadron Collider (LHC) is officially entering a new stage. Today, a ground-breaking ceremony at CERN celebrates the start of the civil-engineering work for the High-Luminosity LHC (HL-LHC): a new milestone in CERN’s history. By 2026 this major upgrade will have considerably improved the performance of the LHC, by increasing the number of collisions in the large experiments and thus boosting the probability of the discovery of new physics phenomena.