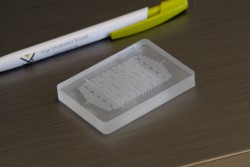 The 2016 “Solvay Prize” is awarded to Dr. Bert Wouters (promotor Prof. dr. S. Eeltink) for his work on groundbreaking research on the development of a microfluidic chip for spatial three dimensional chromatography. The prize will be presented on October 23rd 2016 at the ceremony in Brussels (Flagey) during the “Public Lectures” day organized by the International Solvay Institutes.

Dr. Bert Wouters performed his PhD research in the BioAnalytical Separation Science group within the Department of Chemical Engineering at the VUB in collaboration with the Schoenmakers group of the University of Amsterdam. The aim of this research was to realize a novel multi-dimensional liquid-chromatography (LC) concept, i.e., comprehensive spatial three-dimensional (3D-)LC, which has unrivalled possibilities for high-resolution LC separations. Therefore, a microfluidic chip was developed in which analytes migrate to different positions in a three-dimensional body.