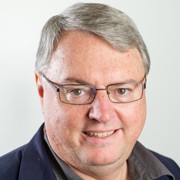 You are cordially invited to the series of lectures on research challenges and emerging technologies for computational modeling of economic and financial domains. The VUB has appointed the Vloeberghsleerstoel 2015-2016 to Peter McBurney, head of the Department of Informatics, King’s College, London, UK.

The inaugural lecture "What are models for? The nature of modeling and simulation" takes place on Friday 26th of February, at 4pm in aula Q.B of the VUB- Etterbeek Campus. Attendance is free, however we kindly ask you to register here.

McBurney is a member of the Agents and Intelligent Systems (AIS) Group in King's College, London, where he undertakes research into agent systems, agent-based models, distributed ledgers and smart contracts, and complex, adaptive (or co- evolutionary) systems. His work finds application in cyber conflict, computational finance and economics, and protocol design and analysis. He was a co-author of the EU Roadmap for Agent Based Computing : Agent Technology Computing as Interaction and according to Microsoft Academic's rankings in January 2011, McBurney was the 65th most-cited Artificial Intelligence researcher in the world, based on academic citations over the 10 years previous.

For the complete lecture series, please refer to the attached schedule.