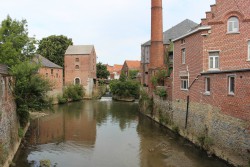 Endocrine disruption and chemicals responsible for this disruption have been talk of the town for some years now. An endocrine disrupting compound is defined as an exogenous agent(s) that interferes with synthesis, secretion, transport, metabolism, binding action, or elimination of natural blood-borne hormones that are present in the body and are responsible for homeostasis, reproduction, and developmental processes (US EPA). The problem with these compounds lies in their complexity and diversity of chemical classes to which these EDCs belong as phthalates, bisphenols, parabens, benzophenones (to name a few), … have all been shown to exhibit endocrine disrupting properties and are quite diverse in structure and source.

Many of these chemicals are used as or present in pharmaceuticals and personal care products (PPCPs) and are of anthropogenic origin. As such, these compounds end up in our wastewater and recently much attention has been paid to PPCPs in river waters and waste effluents, as reflected in the latest Water Framework Directive of 2013. This WFD aims to improve the quality of surface waters in Europe and contains a list of 33 new pollutants and 8 previously regulated legacy compounds. In addition, the EU commission also brought to life a watch list containing 15 chemicals for monitoring and possible inclusion in the next WFD. Among them are dioxins and dioxin-like PCBs, diclofenac and oestrogens, both natural (E2) and synthetic (EE2) in origin.

Given that many of these compounds are used or secreted by humans, wastewater provides an interesting matrix to investigate, especially in the Brussels region. The Brussels capital region houses a little under 1.2 million inhabitants on an area of 161km2 with only 2 major wastewater treatment plants that dispose treated wastewater to the Zenne river crossing Brussels. The challenge for these WWTPs is to operate under regulatory framework and less to specific chemicals of emerging concern. Additionally, treatment stages differ between plants and offer varying degrees of removal efficiencies for these compounds leading them to eventually end up in the Zenne River.

Our objective at hand is to establish a glimpse of the Zenne River status for endocrine disrupting compounds. In order to accomplish this, we will use both bioassays and chemo-analytical instruments to determine EDC loads in the Zenne River, influents and effluents of both WWTPs and also effluent waters of a Brussels hospital. Using bioassay technology, we are able to look at total oestrogenicity of any water sample rather than at concentrations of individually selected compounds. The bioassay chosen for this task is an in vitro transactivational reporter gene assay using BG1 ovarian adenocarcinoma wild type cells as a foundation. Using selective SPE procedures to extract our target compounds (steroid oestrogens and chemicals with similar physicochemical properties) and the reporter gene that is sensitive to oestrogens, we are able to generate oestrogen-like activities expressed as ng E2-equivalent/L. These results will enable us to look at the degradation efficiency of WWTPs, to levels reaching the Zenne River and possible evaluation of their impact on the river’s biological diversity.