PhD University of California at Davis (1993) 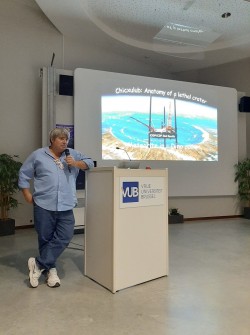 Dr. Philippe Claeys is a geologist, planetary scientist and geochemist working on the consequences of asteroid and comet impacts on the evolution of the bio-geosphere, such as mass extinction of organisms, or large scale global climatic changes. In 1993, he obtained a PhD from the University of California at Davis (UC Davis), carried out postdoctoral research at UCLA, before moving to UC Berkeley as research geologist in the team of Walter Alvarez. He also held the position of senior scientist at the Museum of Natural History in Berlin, prior to accepting, in 2001, a professorship at the Vrije Universiteit Brussel (VUB).

He directs the research unit Analytical- Environmental- & Geo-Chemistry and the interfaculty Earth System Science group. He teaches a basic geology course, as well as advanced classes in sedimentology/stratigraphy, origin of life and paleontological evolution, formation of the solar system, planets and impact cratering etc. 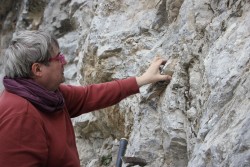 He also teaches as a visiting professor in Ghent University, Katholieke Universiteit Leuven and University of Liège. He was president of Geologica Belgica, the Belgian Geological Society and is the author of numerous scientific publications including > 10 in Nature and Science. In 2016-2017 he was a Visiting Professor in the department of Earth, Ocean and Atmospheric Sciences and International Scholar at the Peter Wall Institute for Advanced Studies at the University of British Columbia, in Vancouver.

When not traveling the world looking for clues to better understand the 4.5 billion years of evolution of planet Earth, Philippe enjoys working in the lab with PhD students and close colleagues on projects ranging from astrobiology to geoarcheology. A hot research topic is currently the search for meteorites in the blue ice fields of Antarctica, together with partners from the ULB and National Institute of Polar Research in Tokyo.  More than 1200 samples have been recovered so far; each new meteorite provides clues to understand the evolution of the solar system and the formation of planets.